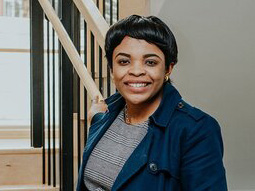 Originally from the Democratic Republic of Congo, Judith arrived to the U.S. as an asylum seeker. Now a proud U.S. citizen, Judith earned her Bachelor’s degree in Social Work from George Mason University. Judith chose to study social work because she is passionate about helping people in need. Judith has worked with hospice patients, seniors, and survivors of torture and severe trauma. She is fluent in French, Swahili and Mashi.

Need a gift for Mother’s Day?
Celebrate the special women in your life by purchasing a gift of goodness featuring heart-shaped cookies baked by Immigrant Food!
Shop Now